In the Line of Peguy: Towards an Integral Heroism (MA thesis 1943; subsequently published in Paris 1951) 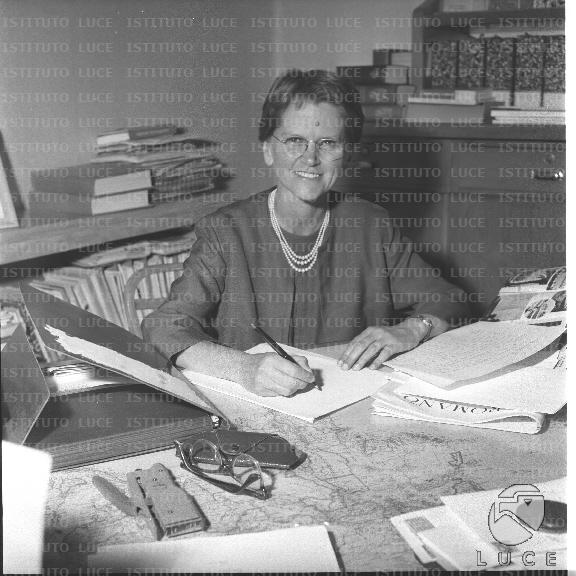 This website has been developed under the auspices of the Golding Centre for Women's History, Theology and Spirituality at the Australian Catholic University, for the purpose of celebrating the life and work of Rosemary Goldie, and to serve as an archive of documents relating to her.

Rosemary Goldie was born 1 February 1916 in Sydney, Australia. She was educated at Our Lady of Mercy College, Parramatta, and at the University of Sydney, whence she graduated BA in 1936, with the University Medal and honours in French and English. A scholarship took her to the Sorbonne, where in 1943 she completed an MA. Her thesis was subsequently published in book form in 1951 as In the Line of Peguy: Towards an Integral Heroism.

After spending the war years in Australia her intention was to return to Paris to begin her doctorate; but her destiny lay elsewhere. She had already begun her long associations with the Grail, an organisation of active Catholic lay women, and Pax Romana, the international organisation of Catholic university students and graduates. In October 1952 she took up residence in Rome, after being recruited to work for the Permanent Committee for International Congresses of the Lay Apostolate ('COPECIAL'). In 1959 Pope John XIII made the epochal announcement of the Second Vatican Council. COPECIAL was given a role in preparing for Vatican II; and when the Council was under way they were given input into the selection of its lay auditors. In 1962 and 1963 only men were chosen as lay auditors; but in 1964 the first women were chosen, and Rosemary was among them. In 1967 Pope Paul VI appointed her Under-Secretary in the newly created Pontifical Council for the Laity. This was the highest position a woman had ever held in the Vatican bureaucracy. When the council became a permanent part of the Roman Curia in 1976, Rosemary’s position was given to a priest, while she accepted (not without protest, apparently) the position of Professor of Pastoral Theology at the Pontifical Lateran University.

In 1990 she received an AO for “service to religion and to international relations.” She died at the Little Sisters of the Poor nursing home in Randwick, New South Wales, on 27 February 2010, aged 94. She bequeathed “all my books and academic papers to Dr. Sophie McGrath to be distributed by her at her discretion to the Australian Catholic University.” Her books include In the Line of Péguy (1951), the partly autobiographical From a Roman Window (1998), and a translation of Il Cantico dell’uomo by Franco Biffi, on Pietro Cardinal Pavan (1992). She wrote the afterword to the autobiography of her mother Dulcie Deamer (1890-1972), which was published as The Queen of Bohemia (Peter Kirkpatrick ed., University of Queensland Press,1998).

Michael Buhagiar received his PhD on the subject of the Australian poet Christopher Brennan (1871-1932) from the University of Sydney in 2012. By profession he is a lecturer, literary scholar and college manager, with substantial experience in the higher education and vocational sectors. His published papers may be viewed here.

Translation of the French and Italian documents in this collection is a work in progress, as also is transcription of the documents (these are in the minority) with legibility issues.

RG unfortunately left no photographs in her archives. The images on this site are taken from the internet or scanned from other sources.